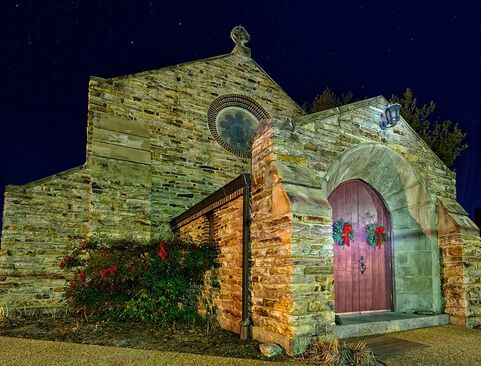 Oddly enough, our church had its beginning on the streets of Woodstock, Virginia, near the year 1845. At that time, and probably before, a number of citizens of Woodstock, and outlying areas, gathered together from time to time for worship, either in private or public places. This assembly of Christians, at some time in our ancient past, would gather together under the watchful eyes of the Reverend Peter Ainsley for worship services until they had a meeting place of their own in the home of Rachel Anderson, affectionately known as “Aunt Rachel”, located on South Main Street.

This Christian group continued to meet in what they called “The Upper Room” of the Anderson home until the year 1880. At that time, they organized our first church located on West High and South Commerce Streets. It was known as “The Christian Church”, and the building was dedicated and the congregation formed officially on July 11, 1880. This congregation consisted of 64 charter members and their names are preserved for posterity in the cornerstone of our present church on Muhlenberg Street.

This first church had a modest growth in membership, much of which resulted from revivals held at the Woodstock Fairgrounds. The building still stands today and has been converted into apartments. It was constructed at a total cost of $3,000.00 and was paid for at the time of its dedication.

Colonel E. E. Stickley and Mr. George W. Miley were prominent members of this first congregation and each contributed $1,000.00 of their own money towards the total construction cost of $3,000.00. Certainly, a number of the 64 charter members of the formal church organized in 1880 also worshiped on the streets of Woodstock and in The Upper Room of Aunt Rachel’s house on South Main Street. By August 16, 1899, the total membership of the congregation had increased to 148.

The cornerstone of our church on Muhlenberg Street was laid on July 13, 1930, on the fiftieth anniversary of the founding of our first church on July 11, 1880.

Construction was complete and the church was dedicated on August 2, 1931. Present at such dedication was Reverend Peter Ainsley who, without a doubt, was a son or grandson of the 1845 Peter Ainsley.

The total construction cost of the building and all equipment and furnishings, was $54,224.64.

During the first 19 years of our congregation’s existence, we had 8 ministers, and for the next 99 years, we have had a total of 8.

The church and members of the congregation borrowed money to make the building project a success, and there was a final note burning ceremony in 1945.

Almost from the beginning, the Woodstock and Edinburg Parishes have shared the same minister, financial needs, and many worship experiences.

It is interesting to note that the church minutes of the official board between the years 1880 and 1920 indicate that disciplinary measures were imposed against members who were found to be living un-Christian lives. And, it appears that several members were dismissed from the fellowship because of their conduct.

It is humorous to note that the minutes of the official board held on May 11, 1932, disclose an entry as follows: “An order is approved for the purchase of one can of deodorizer.”

Then, things started looking up. On February 11, 1940, the treasury indicated a balance of $20.00, with some bills remaining “unpaid”.

Our present congregation consists of 137 active members and 176 inactive members, with preaching services and Sunday School held each Sunday of the month.

Over the many years of our existence, we have had many outstanding church members who have contributed much to the professional, business, and civic activities of our community. However, within our congregation, it has always been our creed that everyone is equal before God, and no one is set apart from the other in worship or fellowship.

Our present church building is now 67 years old, and is considered a beautiful edifice, reflecting the influence of Gothic architecture, which is very uncommon in this area. With great pride, we believe it to be the most beautiful church in Shenandoah County. It is a church which has Jesus Christ as its foundation, and that statement is found inscribed on the cornerstone of the building, and that is the heart and soul of what we believe as Christians.